Home
/
Electronics
Smartphones and Tablets
We should ban smartphones from schools 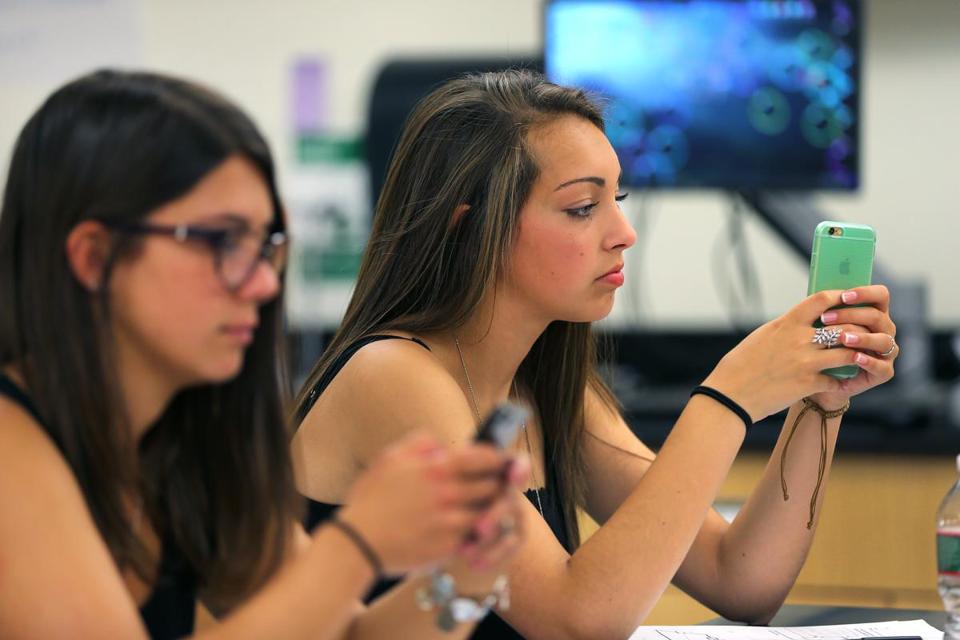 Forget the hokum that these devices are good for ‘learning strategies’. They are bad for young people’s mental health

Weep, weep” was the cry of William Blake’s chimney sweeps as they touted for trade on Georgian streets; children sent into the darkest spaces and choked on filth — the dangers blithely ignored by most adults of the time.

Today, in a supposedly more enlightened age, adults turn a blind eye while children are exposed to a different kind of filth on their smartphones and left to roam unsupervised in the darkest places online. We should weep at the damage being done to young minds and the gutlessness of grown-ups to do much about it.

The Times’s investigation into sexting in schools adds more weight to the teetering pile of evidence of the harm being caused. This year ChildLine revealed that it is being overwhelmed by victims of cyber bullying. A study from Glasgow University found that the pressure to “respond 24/7 on social media accounts can cause depression, anxiety and decrease sleep quality for teenagers”.

One distinguished psychiatrist, Iain McGilchrist, has said that a non-stop attachment to technology is leading to borderline “autistic” behaviour. Meanwhile admissions to hospital for self-harm have increased threefold over a decade, and admissions for eating disorders have doubled over the past three years alone. Can it be a coincidence that mental health problems in the young have spiralled in the same period that, thanks to smartphones, the internet has infiltrated every waking hour of the day?

Dr Richard Graham, a psychologist specialising in technology addiction, told me that over the past five years he has seen increasing numbers of young people “who have terrible anxiety associated with their smartphone — being parted from it causes them panic or even rage”. He warns that “more people should be sitting up and taking notice”.

Adults are not sitting up and taking notice. We are slack-jawed, scrolling through Twitter and checking WhatsApp, too complicit in the great smartphone seduction to refuse them to children.

Being parted from their phones triggers panic in some children

Dazzled by this addictive, life-changing technology we seem to have forgotten that there are two distinct groups of people — adults and children — and the former have a duty to set boundaries and protect the latter from harm.

Instead parents give in to their adolescents’ pleading that not having a smartphone would lead to social death (even though Instagram and Facebook are accessible on a family computer).

Most astonishing is the fact that smartphones are still allowed in many schools. A friend who trained as an English teacher gave up, dispirited, after a year of trying to teach King Lear and the rest over the pornographic groans from boys’ smartphones.

Visiting an academy recently I asked a group of 14-year-olds how they’d feel about handing their smartphones in at the beginning of the day and picking them up at home time. Horror! How would they keep in touch with their friends? I had to point out those holes in their heads called mouths and ears. More dispiriting was the headteacher who explained that the children simply wouldn’t tolerate a smartphone ban, as though it was they who should set the rules.

Some in education peddle the hokum that smartphones are an important learning tool. Christine Blower, general secretary of the National Union of Teachers, has said: “The use of smartphones can be part of successful teaching and learning strategies” as though not being able to access Snapchat constitutes a handicap to employability. Unsurprisingly, the evidence suggests the opposite: these little sirens and their glowing screens damage children’s education. Last year a London School of Economics study found that banning phones from school boosts exam results and benefits low-achieving and low-income pupils the most.

Of course, sophisticates loathe the idea of bans of any kind. They say the answer is more education, more “online safety” lessons, more sex and relationship advice. In response to this newspaper’s sexting investigation the Children’s Commissioner has called for “a rewrite of the guidance to schools” and “a social media campaign to stamp out sexting”. The shadow education secretary Lucy Powell has called for compulsory sex and relationship education.

This is all so limp. Trying to use sex education to defeat the pornographic messages pouring in through children’s smartphones is like piling up a couple of sandbags against a tsunami. The premise for “e-safety” is that children don’t want to go to unsafe places. Of course they do. It is the nature of children to push boundaries and explore the forbidden, and it is the responsibility of adults to stop them. We don’t “have a conversation” with children about the safety of smoking cigarettes at eight; we ban it.

I would like to ban under-16s from having smartphones altogether. That being unlikely, however, we should at least ban smartphones in schools. Give children seven clear hours a day to breathe, away from the endless updates, tweets, inanities and vanities, selfies and belfies.

We are the adults, remember, with not just a right but a responsibility to tell children what they can and cannot do.