Home
/
Electronics
Smartphones and Tablets
We clicked: you’re my type of tablet 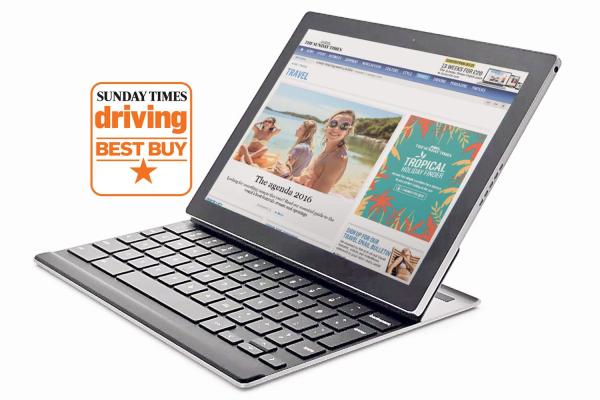 Tablets with detachable keyboards have come of age. We connect to three

Google’s Android software is the most popular for smartphones but has made less of an impact on tablets. The Pixel C is Google’s attempt to show how it can now compete with the king of tablets, the Apple iPad, and as a hardware project it succeeds brilliantly. At 10.2in, the display is similarly squarish but slightly larger than that of the iPad Air 2, and, at 308ppi, has 15% more pixels per inch. As such, it’s as sharp, colourful and bright as any on the market. The case is metal, the build feels premium and it runs Marshmallow, the latest version of the Android operating system. Charging is fast over the new USB C standard (sadly, none of your old cables will fit) and battery life is about 10 hours. The keyboard (an additional £119) is a beautiful piece of engineering that doubles as a cover to protect the screen (and recharge the wireless connector at the same time). It is attached by magnets so strong they almost grab the tablet from your hands; detach, flip and snap it back together to create a laptop. The tablet’s weak spots are a stingy 32GB capacity (a 64GB version costs £479) with no memory card slot and the relatively few third-party apps optimised for this size of screen and aspect ratio.

It looks like a blown-up iPad, and that’s basically what it is. The Pro runs Apple’s regular tablet software, and while the screen is now 12.9in, it retains the same aspect ratio and pixel density — 264ppi — as its smaller cousin, the Air 2, so apps do not need to be rewritten to fill the display. The good news is that means all items in the world’s best tablet software store, the hundreds of thousands of apps already optimised for the iPad, run without fuss. They look fantastic too: the extra screen space makes this feel more like using a laptop than a tablet, and tweaks under the bonnet leave you in no doubt of the computing power available when you need it. Accessories are not cheap: the Smart Keyboard (£139) is a wireless, MacBook-like keyboard-cum-case, and the Pencil (£79) is an excellent pressure-sensitive stylus. Memory is an underwhelming 32GB (a 128GB version costs £799) and it’s heavy, weighing in at more than 2lb (with case).

Verdict Warn the bank manager: you might mock at first sight, but use the Pro for a while and all other iPads start to feel undersized and underpowered.

The Pro 4 is the fastest Surface yet, with a 12.3in screen at better-than-iPad pixel density of 267ppi. It’s a thick device but light, despite a metal casing that finds room for a useful USB slot. Ticking beneath is a genuine computer operating system, Windows 10, running two types of software: apps (from a not-great store) and, more usefully, thousands of regular programs. The base model has 128GB of storage and the Intel Core m3 processor used by many cheaper laptops. For silly money (£1,799) you can go up to a Core i7 and 512GB, outpowering any tablet rival. The £82 Type Cover is an improvement on previous Surface keyboards, offering well-spaced, clicky keys. A pressure-sensitive stylus is supplied. As a stylish laptop, the Pro 4 is a success; where it falls down is in touchscreen tablet mode, where Windows 10 feels clunky compared with iOS and Android.

Verdict Powerful but pricy, as you’ll want the keyboard cover too.