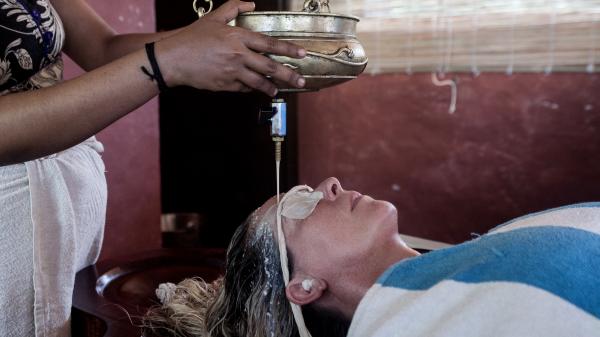 At India’s extreme spa, the solution to heartbreak is to down two gallons of liquid in one go

Five years ago, my husband left me for a younger model.

In that time, I tried to keep my family together, hoping that he would come back to us. But eventually I had to face the fact that he had chosen otherwise, and that it was time to move on.

Those five years had taken their toll. I was unfit and unhealthy; none of my clothes would fit me. Looking in the mirror, I saw the spectre of a lonely, ugly old age beckoning. It was time to take drastic action.

I had seen panchakarma at work long before I knew what it was about. I bumped into an old friend who three years previously had lost his wife to a brain tumour. After a trip to India, where he had undergone the treatment, my bereaved and shattered friend was transformed: he was nearly two stone lighter, his eyes were clear, his skin glowed; he exuded energy, good humour and zest for life. Whatever panchakarma was, I knew I wanted it, too.

Three months later, I found myself at Ayurveda Yoga Village, a four-hour drive south of Goa. While technically a hospital, the “village” turned out to be more like a slightly run-down holiday resort: 18 simple rooms clustered beneath a grove of shady fir trees, which led onto a six-mile white beach.

On my first morning, I met Dr Anu, a softly spoken young woman in an immaculate sari who would be in charge of my treatment throughout. I gave my condition as “emotional exhaustion”, but other patients were there for everything from cancer, osteoporosis and arthritis to constipation, insomnia and general burnout.

Panchakarma means “detoxification”. It forms part of the ancient ayurveda tradition, a body of medical and philosophical treatises (yoga is one) native to South India, which adherents believe originated 10,000 years ago and that aim to treat the body, mind and soul together.

My first three days were so enjoyable, I could almost imagine I was on holiday. We rose at 5am to attend puja, or prayers, followed by yoga and meditation for an hour and a half, which started in the dark and ended in morning sunshine.

I had a massage every day and the most delicious vegetarian food; I took long walks on the beach and swam in an ocean as warm as a bath. I found the time to think and be silent. (“Unnecessary talking” is discouraged, as is speaking at mealtimes.) It was wonderful. But the wan faces of my fellow patients should have been warning enough.

The next four days were “ghee days”. Medicated ghee, or clarified butter, is drunk at sunrise in increasingly large quantities, until the body is saturated. Apart from the ghee, you fast completely.

On the second day, I felt so weak and dizzy that I couldn’t get out of bed. According to Ayurveda, the ghee delivers the medicine deep into the cells of the body, sweeping up all the toxins as it goes. These are then expelled from your system through a number of different purges.

On the first day of these purges, I rose at 4am and made my way to the treatment hut, where, after the usual ritual prayers, I was given a spoonful of “medicine”. Then, sitting facing a large plastic bucket, I was asked to drink 3½ pints of milk, nine pints of liquorice water and 3½ pints of saline water in as quick a time as possible.

I sat miserably hunched over the bucket, sweating and heaving to no effect

The first few glasses were not hard to get down, but soon my stomach began to feel extremely painful. Four more glasses and still nothing happened. Ancy and Viji, the two therapists, were kindness itself, even as they handed me another glass of milk laced with a purgative. I sat miserably hunched over the bucket, sweating and heaving to no effect, until, suddenly, the liquid was expelled from my body so violently that it shot right over the top of the bucket.

So the process went on, until nearly two gallons of liquid had been drunk and expelled. When I thought I couldn’t possibly ingest another drop, I asked how many more glasses I had to get through.

“How many times?” came the joyful cry from seemingly every village staff member as they passed me, sitting out on my terrace on my second major “purgation” day. Now I was detoxing from the other end (27 times, in case you’re interested).

For several days, I felt weak and depleted, too tired even to read. But quite soon after that, I woke with a powerful sensation of lightness and peace. There were more purges — nasal drops of medicated ghee, and three days of enemas — but these seemed insignificant beside the earlier horrors. I spent much of that time luxuriating in doing absolutely nothing. I had no internet, no phone and no responsibilities for anyone other than myself.

On my last day, I hired a rickshaw and went into Kumta, which sits at the neck of an estuary. A colony of egrets, fiercely white against the green estuary waters, clustered together on the mangroves at the entrance to the little town. I stopped to take pictures at the fish market, where women sat over baskets of tiny silver fish, crabs and prawns, and looked in at the Hindu temple on the main street. Daringly, I bought some spicy dried bananas and a bottle of cold water (normally proscribed): it tasted like champagne. Ordinary life — and the ordinary world — was beckoning.

Panchakarma is not for the faint-hearted. Its full effects are said to take several weeks to kick in, but I can already see the difference. My nails and skin are pink and shining; my hair is glossy; the whites of my eyes are actually white; my tongue, which at times has looked like the bottom of a parrot’s cage, is as pink as a newborn’s. I have lost nearly a stone in weight. I sleep like a baby.

Best of all, though, is an extraordinary feeling of peace and, dare I say it, happiness, which comes from some deep place I thought I would never find again.