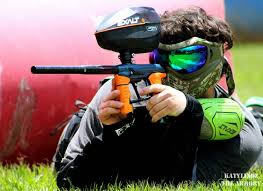 Call of Duty is probably responsible for wasting more of my life than any other video game. I’ve spent countless hours wasting every shape of friend (who are foe in this world), playing warzone tournaments for money and working on my aiming skills. The only problem is that as I have got older, my waistline has expanded and it dawned on me that I should get out and “cut down on me pork life mate”

I tried gyms, classes and even personal trainers, but I just don’t like the gym and so keeping up a routine was nigh on impossible. So myself and a few other Call of Duty playing friends decided to go and explore the real world equivalents to see how that would do. Well, we did consider doing the actual equivalent of going to a firing range and learning to shoot a gun, which would most definitely have its own perks. While it can be a fairly sensitive topic to broach, there are many people today who practice using a firearm in a licensed facility, and the range of guns available today with helpful accessories like holsters for fat guys, thin guys, tall people, women, and basically anyone who can handle a gun, it could actually be worth exploring.

Anyway, as for the activities we tried…

The first place to try was our local paintball battlefield. We turned up and paid our money and out we went. It was carnage…and not in a good way! Our standard issue guns were sorely outmatched by an array of weekend warriors with what may as well have been thermonuclear detonators.

It turned out that the weekend games for adults are pretty much open, so it makes getting into it really difficult. Think of those people online that sit over respawn points and just shoot people as soon as they emerge and you get the idea of how frustrating it is.

They also would only let us book the place for private hire during the week and the cost of hire plus ammo was pretty darn ludicrous. Nope this was not going to work.

So, next idea, NERF guns! I you have kids, there is a good chance they will have asked for one of these things by now. Termed “blasters” these guns fire foam darts (not bullets!)

We had messed around with these before (OK we stole them off the kids!) and it had been really good fun. However NERF have now released a range called “Rival”. They are aimed at 14+ age range, so not only which shoot a bit harder than the normal “Elite” range they are made to fit adult hands.

The range goes from the Apollo, a spring powered pistol, right up to the awesome Nemesis which features a massive 100 round hopper and blasts up to 5 rounds a second….

We started off with stealing off the kids blasters and rented a local school hall. After a bit of moving the gym equipment around we had a very serviceable arena.Then the foam reigned down.

There are a ton of game rules for NERF wars and we went through many of them from deatmatch to capture the flag. We were all utterly exhausted by the end…yep fun and keeping us fit!

This last one is very new but Jim, one of the NERF war gang, came across Skyrocket’s RECOIL, which is essentially a self-hosted laser tag system. The guns are hooked up to your mobile phone via an app which then talks to the base station. The base unit has a range of about 250′ so you can set it up in a park and run around within a 500′ “arena”. The system figures out where you are and whether you hit your opponent.

To add to the Call of Duty-ness of it, it also offers a readout on your phone screen showing where your team and opponents are, your health, where the ammo is etc.

We set it up in a local woodland as the park didn’t have any cover, and playing on a wide open space didn’t seem much fun. The range was a little bit less than the claimed 250′ but it was enough to create a really good splaying area.

The trees, logs and undergrowth made it feel so much like a real-world game of CoD. We have now ordered a few new guns (we started with the basic pistol and have ordered some of the rifles) as the base station can accommodate up to 16 players

We have now found ourselves geeking out on NERF guns for indoor and Recoil for outdoor fix of CoD. Yes, we still do play CoD but our outdoor games have become a weekly thing and yes, the belt is not anywhere near as tight now!!