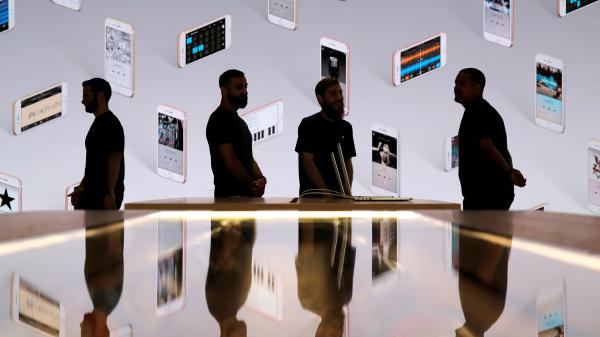 Until yesterday, few people were more enamoured of the iPhone than Laird, the British electronics and technology business that supplies parts to stop Apple’s smartphone overheating.

That love affair ended abruptly yesterday when the company slashed its full-year profit forecast by more than a third, citing slower smartphone sales and sending its shares down more than 48 per cent.

The sell-off marked the worst single-day drop for the stock and wiped more than £420 million from the market capitalisation of a company that has its roots in 19th-century heavy engineering and was part of the shipbuilder Cammell Laird before reinventing itself as a maker of precision materials.

Laird made a new name for itself winning business from Apple and Samsung, having built a strong reputation as a reliable and agile supplier of highly specialised metal components. Capable of ramping up production quickly, it can deliver product to smartphone makers from its 13 production facilities in Asia.

However, yesterday it said that it expected underlying pre-tax profits of £50 million this year, down from the £77 million figure that analysts had been expecting as recently as August.The profit warning, made only two months after the company installed a new chief executive, comes at a time when developed markets are approaching “peak smartphone” as consumers change their devices less often.

Smartphone sales are expected to grow by 7 per cent in 2016, half the rate of 2015, according to Gartner, the research company. CCS Insight, another researcher, expects sales in western Europe and North America to start falling after 2017.

As for Apple, it sold 40.4 million iPhones in the third quarter, a drop of 15 per cent on the year, as it prepared for the release in September of the new iPhone 7.

Although analysts initially predicted muted demand for the new device, pre-orders were stronger than many carriers and retailers had expected. The company may provide more details on sales when it publishes its quarterly results next week.

Amid growing uncertainty about smartphone sales, manufacturers are pushing for lower prices from suppliers, as well as ordering lower volumes.

Laird said yesterday that it had been hit by “unprecedented pricing pressures”, suggesting that it is losing orders to cheaper rivals. “Competition has taken some share, which we don’t normally expect to happen. They have been squeezed on price and volume,” Nick James, an analyst at Nomura, said.

Laird’s share price fall demonstrates the dangers of its heavy dependency on Apple and the peculiarities of the smartphone market, which accounts for about 20 per cent of the company’s business.

In an attempt to regain a competitive edge, Apple and its competitors are intensely secretive about designs and volumes. Information to suppliers is drip-fed on a need-to-know basis and orders are put in at short notice, leaving small windows for parts makers to increase production.

Laird said yesterday that orders had come in much later than in previous cycles and that visibility on volumes remained poor.

Tony Quinlan, Laird’s chief executive, said that other part of the business continued to perform well. Shares in Laird closed 150¼p down at 158½p.

How lone voice in crowd said: ‘Sell, sell, sell’ It was a humdinger of a profit warning, coming out of the blue for most investors, who saw the value of their holdings almost halved yesterday. But was it as unforeseeable as all that? (Patrick Hosking and Martin Waller write)

Five of the six analysts who follow Laird had the company as a “strong buy”, “buy” or “hold”, according to Thomson Reuters data. The consensus was that the company was toddling along nicely and would just beat last year’s profits of £73.1 million.

The share price has been resilient over the past two months and even the Galaxy Note 7 debacle did nothing to alarm investors. Samsung, a key Laird customer, was forced to scrap the phone after it kept exploding.

The lone Cassandra, warning of doom ahead, was Benjamin May at Berenberg. He initiated coverage of Laird in August with an emphatic “sell” recommendation made in a report entitled Warning Bells Ringing.

He said that Laird traditionally made almost 40 per cent of full-year profits in the first half and therefore had a mountain to climb if it was to meet expectations this year, having produced 20 per cent of that target in the first half. He also pointed to the pricing pressure that brands such as Apple were imposing on other suppliers.

The resignation of David Lockwood as chief executive was another reason for caution, as was the blizzard of acquisitions by Laird that had disguised the fact that its organic revenue growth was very unexciting. “The clues were out there,” Mr May said yesterday.

Other analysts seemed to be basing forecasts on Laird carrying on its strong five-year record. Excitement about the internet of things was also boosting its appeal, while takeover hopes further buoyed the shares. “I felt differently,” said Mr May, who issued another “strong sell” note last month.

Coverage of mid-cap stocks has dwindled as investment banks cut back on the number of analysts and focus more on the biggest stocks.

Some analysts rely more on being “guided” to their forecasts by company finance directors and investor relations managers rather than conducting their own primary research and coming to independent conclusions.

Behind the story
Few individuals are likely to feel the fall in Laird’s share price as much as David Lockwood, right, who quit his job as chief executive at the company in August to take up a new post at Cobham.

He is due to receive a multimillion-pound signing on bonus at his new employer based on performance-related stock awards he would have received had he stayed on at his old company.

As the Laird share price halved yesterday, Mr Lockwood watched the value of his shares — and his golden hello — at Cobham melt away.

According to Laird’s accounts, he held 949,405 shares under its long-term incentive and employee stock ownership schemes, as of December 31, 2015. As some of these shares do not vest until 2018, he will be hoping for a recovery before then.